She likes to practice martial arts.

Sarah Dupont (サラ デュポン) is the main singer of Kaleido Stage from the United Kingdom, as well as the building manager of the dormitory who is also an avid fan of martial arts.

Sarah is a beautiful young woman with wavy waist-length blond hair that is swept to the left side and brown eyes.

She is most of the times seen in her martial arts clothes when she is training. She might seem to clean up pretty nice when she goes to sing on Kaleido Stage, but she hides her nun-chucks in the sleeves of her costume.

Sarah had made her first appearance when Sora Naegino had open up the door of Sarah's apartment that Sora had to avoid Sarah flying towards her.

Sarah is well acquainted with Kalos whom she has been with Kaleido Stage since the beginning, when Kalos and Sarah performing on the street with their other friend 'Andy'. 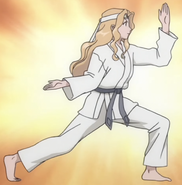 Sarah in her gi 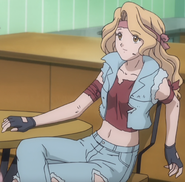 Sarah's ninja outfit, shortly after being gifted it by Sora

Sarah with her bounce shoes

Sarah's fully outfit with May Wong

Close up of Sarah's face

Sarah in her introduction

Sarah while trying to wake Sora up

Sarah while part of a knife throwing act