Ezo Tsuda (Japanese)
Kevin Hamilton (ケビン ハミルトン) is the husband of Laura Hamilton, the father of Layla Hamilton and one of the people who invested in Kaleido Stage.

Despite seeing how much his daughter loves performing on stage, he has high hopes of seeing Layla as an actress someday and hopes she'll give up on stage performing.

Kevin has short blonde hair, blue eyes and a mustache.

He is always seen in business suits.

After the death of Laura Hamilton, Kevin buried himself in work to forget about it. Despite this, Layla Hamilton worked especially hard at Kaleido Stage in hopes that she could make her father happy again, but to no avail. Thanks to Sora Naegino's efforts, he delivered a message to Layla on her birthday, telling her how much he loved her. Unknown to him, after Yuri Killian took over Kaleido Stage and kicked Sora and her friends out, Layla returned to help Sora disguised as the Masked Star (he had thought that Layla would be in London on her film set, in which she left to be with Sora). When her identity is revealed during Sora and Layla's performance at the competition, he is very upset with her and questioned why she would intentionally leave her filming and return. Layla explained that she wouldn't be satisfied until she could perform a "perfect" show, and she felt she could with Sora as her partner. After that, he tells Layla to at least return to London and finish filming and leaves without a word. It wasn't until Yuri invited him to see Sora and Layla performing the Legendary Great Maneuver that he tells Layla how magnificent a performer she is.

Kevin is strangely absent during the second season, New Wings, despite the fact that Layla Hamilton returns. 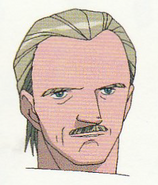