Ken Robbins (ケン ロビンス) is a character from the Kaleido Star anime and one of the first main characters introduced in the first episode. Though Ken has a behind-the-scenes type job, Ken is always first to lend Sora a helping hand when she really needs it. Ken has a crush on Sora that seemed to have blossomed since she joined Kaleido Stage. Ken too had dreams of performing on stage, but he couldn't because of his weak heart. He acts as Sora's coach and personal trainer during practice.

Ken is the first person to become Sora's friend after she is denied her chance to audition for Kaleido Stage. He invites Sora to see the show and shows her backstage. He tells her of his old dream to be a performer. But, he has a weak heart and that ended his dream. But he still feels that Kaleido Stage is where he should be and he became a stage helper, the men and women who work behind the curtain with effects while the performers are on stage. After Sora performs during Romeo and Juliet accidentally and leaves, Ken comes rushing out telling her that Kalos has allowed her to join. Since that moment, Ken is always very worried about Sora since she hasn't had the same basic training that the others have had. Sometimes, Ken's crush for Sora makes him slightly awkward around Sora, causing him to freak when Sora tells someone that Ken isn't her boyfriend. After Sora joined, he met Jerry, the policeman that escorted Sora to Kaleido Stage in the previous episode, and decides if Ken is good enough to be Sora's boyfriend. But after squeezing Ken until his face turned red, Sora told Jerry that he was her friend and Jerry let go. When Sora told Ken about finding Johnathan, her description of him had Ken imagine a small fat man with gray skin. Ken always encourages Sora to eat the right food and coaches her on her maneuver details. When Yuri takes over Kaleido Stage, Ken invites Sora, Anna, and Mia to stay at his house with his family until they find their own place. Ken's little sister, Lucy, is revealed to be Anna's number one fan but doesn't laugh when Anna tries to be funny but swoons when Anna poses, much like Mia. Ken is by Sora's side when her aunt is delivering her baby sister and encourages her to root for her and her mother.

When Sora and Layla are training for The Legendary Great Maneuver, Ken comes along to personally train Sora after Kalos is putting too much pressure on Sora. But Kalos told Ken not to ever doubt Sora or Layla could do it. He said that if Ken would help Sora, he would not mention the maneuver to her. With his help, Sora makes it through training and the two perform the maneuver and win back Kaleido Stage.

Ken is one of the few characters who doesn't change in the new season except for one different detail. After seeing how funny Ken is, Anna constantly tries to make Ken her new partner in comedy and Ken constantly refuses. He only performs with Anna once during the Car Exhibition show as the rear end of the caterpillar costume consisting of Anna, Hanna, Barbara, and himself. Sometimes, he would break lose of the chain and everyone laughed at him, which seemed to spark jealousy in Anna's eyes. Other than that, Ken only performed once for Sora on the Children's Stage as apart of a special show Sora's friends were putting on for her. From there on, Ken's coaching skills have reduced since Leon seemed to take the role as Sora's teacher for The Angel's Maneuver.

Ken and Jerry are also the two to go all the way to Japan to see Sora after she quit Kaleido Stage following her loss at the Circus Festival and showed Sora the ropes of being a stagehand when she comes back. One time Ken's helpful advice shined was when after Sora tore the skin on her toes from training so much, Ken bought Sora some special bounce shoes to help her with her balance. Ken is there when Sora and Leon perform the maneuver in Swan Lake and applauds with the rest of the audience.

Kaleido Star OVA 1: The Princess Without A Smile[]

Ken makes a short and low importance role in the first OVA. He arrived outside Sarah's room with a delivery, only to be nearly attacked by her and her furious punches. The painting she ordered, being the wrong one, was revealed to the others and Mia got her inspiration for the show from that painting. He also was with Sora and the others when they went after Rosetta when she ran away.

Ken appears in the OVA with Rosetta in the short "The Amazing Attempt at Diabolo" where Ken tries to learn diabolo basics from Rosetta herself. But during the performance, Ken's constant daydreams about him and Sora blind him and sometimes causes Rosetta to say some hurtful things in front of Ken and causes the audience to laugh while he whines. Ken's cluelessness also causes him to fumble some of the basic moves Rosetta teaches him and is billed for Rosetta's performance (Kalos figured that since this was for Ken, he should be the one billed). His last line before the short ends is him crying for Sora. 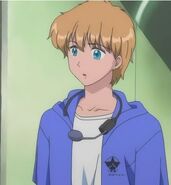