He grabs other people’s thighs to feel their muscles. (Sora in anime, Jerry in manga)

Kalos Eido (カロス 永戸) is the head manager and boss of the entire Kaleido Stage and gives Sora Naegino many helpful pieces of advice throughout the anime. He also maintains high expectations of everyone he encounters. Before Kaleido Stage, Kalos was a stage magician and acrobat and used to perform on the street with Sarah Dupont and Andy Low; their past relationship is rather vague. Kalos founded Kaleido Stage with the money he got from the insurance company after he injured his fingers during an audition for a spot in Las Vegas. As a professional, he has strict standards when it comes to how things are run at the Kaleido Stage and how his performers should conduct themselves. While he's firm in his decisions, occasionally he'll give in and let people spread their wings as they please. Kalos is also the one who trained Yuri Killian's father, Arlon Brass, for the Legendary Great Maneuver, but sadly this failed and Arlon died, traumatizing Yuri and embittering him. He is the only person who can tell Layla and Sora how to train for the act. 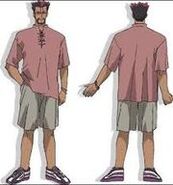