Yu Ishizuka (Japanese)
Jerry( ジェリー), or "Mr. Policeman" (ポリス) as Sora and some of her friends call him, is a character that appears since Kaleido Star's first episode.

He is one of the only characters of a different race among everyone else. As a policeman, when on duty, he is regularly seen wearing a white t-shirt with blue sleeve lines, grey shorts, a grey hat, white socks with blue stripes and blue-and-white trainers.

Despite his muscular appearance, he is shown to be very gentle and kind towards others - especially towards Sora, who he has a clear father-daughter relationship with, and is extremely supportive of her, going so far as to attend her performances regularly when his career allows him to. He is also something of a romantic, as is evident in his relationship with (and eventual marriage to) Kate.

He works for the Cape Mary police station and personally gave Sora a ride to Kaleido Stage from the station when they mistake her for a runaway child. Jerry likes to call himself "Sora's number one fan" since he is a big fan of Kaleido Stage as well after Sora tells Jerry her dream. When with Ken during their trip to Japan to see Sora after leaving, he calls Ken "Sora's number two fan" out loud, much to Ken's displeasure. In a later episode in the second season, Jerry reveals that he was once picked on as a child which caused him to bulk himself up over the years. Jerry is always there for Sora's shows and is always seen in the audience somewhere. During New Wings, he needs Sora and Ken's help when he wants to propose to Kate before his 30th birthday is up (which was the same day as the episode), but can't find her and is extremely nervous. When he finally catches up to her, a robbery takes place in the bank and he is left tied up while Sora tries to perform for the criminal. After Sora succeeds in making him smile and willingly surrender himself to the police, he tells Kate that he would like "to place her in eternal arrest" (his way of proposing to her while riddled with embarrassment). Kate said she would love to and Jerry is overfilled with joy. 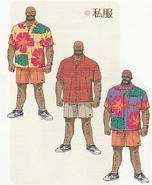