Kaleido Stage, Freedom Lights (during second half of first season)

Anna and Ken appears to be the only characters with which their genetic, biological parents show up in some episodes of the series

Anna Heart (アンナ ハート) is one of Sora's first friends when she joins Kaleido Stage. Like the others, Anna rejects Sora at first thinking she "got in good with the "boss". But when she saw how Sora trained to perform the Golden Phoenix, her thoughts of Sora changed instantly.

Anna and Mia debut together in the second episode after Sora joins Kaleido Stage. She believes Sora got in good with the boss while they all worked hard to become members. When Sora is cleaning the stage by herself, Anna tells Sora she can wash the entire stage herself and walks away with the others laughing. During training, Sora tries to follow everyone else but is doing a poor job. Anna and Mia mock her abilities which soon leads to Sora accepting Layla's dare to perform her Golden Phoenix maneuver. Sora trains her hardest to make Layla accept her and Anna soon sees it. She crosses paths with Sora again after training and sees that she was wrong about Sora. When Sora returns to training, Anna and Mia become Sora's friends and support her. After Sora passes Layla's challenge, Anna joins Sora and Mia for a party in Sora's room.

After this, Anna's real personality appears. Anna's dream is to become a stand-up comedian and make everyone laugh. But every time she tries to add some comedy to their performances on stage, Mia is the first to stop her. Anna is known to pose beautifully when she is trying to think of something funny (to her annoyance). During the performance of Cinderella, Anna is chosen to be one of the performers on stage with Mia while Sora is a bit player in the audience. But after pulling some strings, Anna, Mia, and Sora all star together as the Fairy Godmothers and create a maneuver especially for the performance. She later stars as Sora's partner in The Little Mermaid as the prince that the mermaid falls in love with. All the time, Anna continues to support Sora. Before Yuri takes over Kaleido Stage, Anna's father comes to perform at a comedy club and they see each other again. Anna is disgusted by what her father turned into since she was a little girl, who always made her laugh with funny voices. But with help from Sora and Mia, Anna begins to love her father again and their bond is restored.

After Yuri takes over Kaleido Stage and kicks Sora and friends out, Anna is one of the first to create Freedom Lights, a new Kaleido Stage that she, Sora and Mia are the only members at first. They try to find part time jobs and soon hit big with Marine Park when the park owner wants to make a contract with their new company. But Yuri's interference ruins it and they try to win a performance festival with The Masked Star's help, only for Yuri to disqualify them after exposing Layla. When Sora and Layla go to the Grand Canyon to train for The Legendary Great Maneuver, Anna and Mia go there after hearing the rumors that performers died trying to perform the maneuver. They support Sora strongly as she struggles and are there when she and Layla succeed.

After Layla quits Kaleido Stage due to a shoulder injury, Anna continues to be Sora's friend and supporter. Not much changes about Anna except she is working twice as hard to become a comedian with Hannah and Barbara at her side (who seem to laugh at everything she does). She is there when Sora goes to win the Circus Festival and worries about her after Sora drops out crying and leaves Kaleido Stage. When Sora and friends go on together to perform in Swan Lake, Anna puts all of her training as a comedian to the test and she makes everyone in the audience laugh, thus making her dream a reality.

While Anna is a part of the first two OVA, she and Mia are not in the third OVA (despite her and Mia appearing in the opening with Sora, Layla, and Rosetta).

Anna and Mia have been friends with each other for a long time.

Performances Through the Series[]

Close up of Anna's face 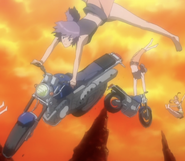